I have every intention of setting up a bibliography page on this blog eventually, a page that will have books and blogs and DVDs that are good secondary sources on romantic comedy. (We’re still in the “let’s put on a show in the barn” stage of this blog, so there’ll be a lot of changes as we adapt.) But there were two sources I already knew would be on there, two good places to learn about writing romantic comedy and the genre in general, and I’m going to start now with the first one.

That’s Billy Mernit’s book, Writing the Romantic Comedy. I am a very tough sell on writing books, most of which I find recycle the same info or insist that their methods are crucial (“You must interview your characters”), so when I saw a book that promised to help you write romcom, I was skeptical. I love the genre, but it’s a bitch to write. So I sat down with the book and a Diet Coke, prepared to be annoyed. Reader, it’s a really good book. Mernit takes the genre seriously, he takes writing seriously, and he’s a terrific teacher. The book has five stars at Amazon, and when you consider how many bitchy writers there are out there (that would be me), he’s clearly made a lot of difficult people happy. I recommend his book without reservation.

And then there’s his blog, Living the Romantic Comedy (the link is also in the blogroll to the right) which is a terrific resource. Check out “Romantic Comedy or What” for another take on the kinds of arguments we had back on Argh trying to determine what the hell a romcom is.

And he’s a great source in another way: He’s here, commenting as Mernitman, which is kind of like having Northrup Frye drop by for your drama class. I did a fan squee in private e-mail but I’ll do one here, too. His book is really good, his blog is really thought-provoking, and he’s right here where we can argue with him about a genre he knows probably better than any of us. Or at least he’s here until he runs away screaming. Play nice, people. He knows things we need to know. 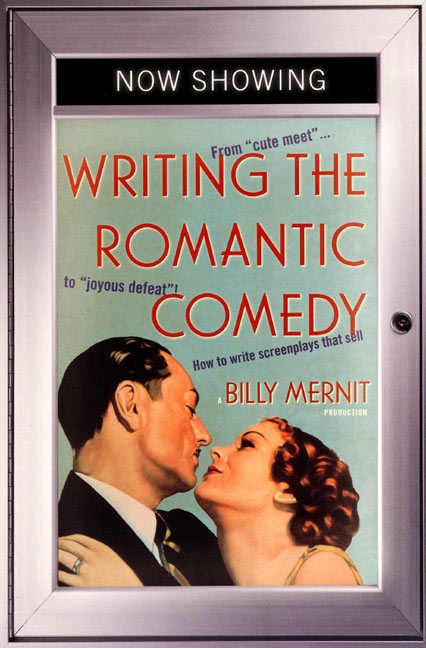