Ep 2: It Happened One Night 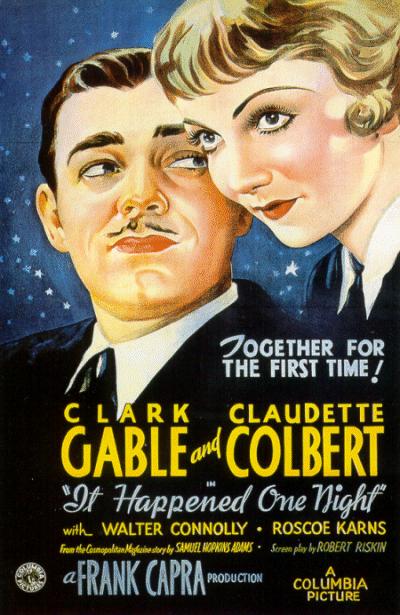 There is lots of love from both of us for this black & white classic that should be used as one of the golden standards for storytelling. There was some nitpicking on character arc but mostly just a lot of gushing. Get the podcast: Listen here at PopD | Go to iTunes

Lucy says: 5 Pops ~ It Happened One Night was one of the first black and white movies I saw, and it was so good, it got me into classic films. What can I say? It’s a gateway drug. When I was younger, I loved it because it had romance and humor, and really, that’s all I need. Looking at it now from the perspective of a romantic comedy writer, I find that not only does it stand up, but it utilizes such eloquent skill in the storytelling that it’s an ideal movie to study for any writer.

Jenny says: 5 Pops ~ I was prepared to take this movie apart and find all the flaws, but it’s a damn near perfect film with many brilliant narrative moves and real genius in the character development and the escalation of the romance plot. During the podcast, Lucy and I analyzed the heroine, the hero, some of the supporting characters including the antagonist, looked at some of the powerful narrative devices, and then talked about the way the comedy and the romance were essential to each other, but it was pretty much a love fest, no carping here. (Lucy thinks the father’s character arc is a character violation but she’s wrong.)

It Happened One Night set the bar for romantic comedy, and it set it high. Frank Capra is a genius, Gable and Colbert deserve their lasting fame, and I love Roscoe Karns (aka Oscar Shapeley). Jenny’s rating breakdown: Romance: 5, Comedy: 5, Structure: 5