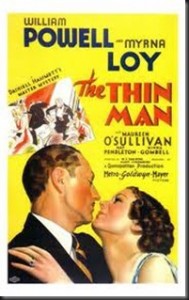 Story: A former detective, now retired and married to an heiress, is reluctantly drawn back into detecting when an inventor’s mistress is murdered.

Detective: Nick Charles, abetted by his wife Nora, his dog Asta, and a lot of alcohol.  This is a very detective-centric story, and the movie version relies heavily on the chemistry of Powell and Loy which is legendary.  In fact, they were cast in this because the director noticed them bantering between takes on another movie. 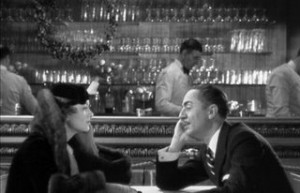 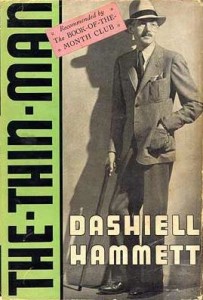 Mystery Analysis:
Detective as protagonist?
Jenny: Nick Charles is definitely the protagonist, but the screenwriters wanted the victim and all the suspects introduced first, a mistake that Hammett didn’t make.  His novel opens with:

“I was leaning against the bar in a speakeasy on Fifty-Second Street, waiting for Nora to finish her Christmas shopping, when a girl got up from a table where she was sitting with three other people and came over to me.”

That’s the right place to start the story, with the detective, especially a mystery like this one that is almost entirely dependent upon the charm of its main characters.

Lani: Nick is the protagonist, not that you’d know it much, because he doesn’t really have a dog in the fight. I think a good protagonist—even a detective in a mystery series—needs to need to solve the crime, even if it’s just for the paycheck. The fact that Nick doesn’t seem to care much for the first half of the movie makes me care even less. Plus, it’s a great lesson in “Start with your protagonist.”

Murderer as antagonist?
Jenny: Yes, but the plot is so confusing that it’s hard to tell.  I’d read the book a couple of times before so I knew what was going on, but I think it’d be tough if you were coming to this fresh.

Lani: Well, at first Nick doesn’t want to get involved, and Nora pushes him into it. Then Nick does get involved, and Nora tells him it’s too dangerous. The people who point guns at Nick (and they are legion) aren’t the antagonist, nor are they sent by the antagonist. They’ve just all got dogs in the fight, which again, Nick doesn’t. His dog is very laid back about the whole thing. So, a protagonist is trying to do something (which eventually, Nick is trying to find the murderer) and the antagonist is blocking him (the murderer trying to get away with it) but until the final scene, it’s really just everyone running around like headless chickens.

I would say the antagonist is the murderer, but it’s kind of slushy.

Jenny: The conflict begins because Nick doesn’t want to be a detective any more and Nora and others keep pushing him back to his old job, but the movie plot is so loose and confusing that the conflict isn’t significant.

Lani: The conflict—everyone wants Nick to solve the mystery, while Nick doesn’t—begins before the actual murder takes place. There is a murder, and we do want to find out who it is, so there’s that, but I’m not sure I’d say yes to this question.

Fair play with all the clues given?
Jenny: Nick cheats by recognizing the skeleton and not cluing the audience (or the police) in.

Lani: What Jenny said. Plus, the clues we had were as pickled as the protagonists.

Lani: I don’t know. There’s that moment in the end where Nick turns to Nora and says he has no idea who did it, he’s just laying it out to make the murderer nervous until he revealed himself. That seems like luck to me. Jenny thinks he was just kidding, and maybe he was, but based on that, I’d say it was luck.