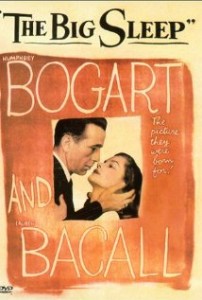 This week, the lovely Krissie (Anne Stuart) joined us for the discussion, set on defending one of her favorite movies. Reactions were mixed, and there were complications in the audio (a tech gremlin kept stopping the recordings) but despite all, we pulled out a fun and (we hope) marginally informative podcast. We also honed our approach to defining/rating mysteries, so there’s that.
[audio:/podcasts/pdm06.mp3]
Download Episode | Subscribe via iTunes | Subscribe via RSS

Story: The charming Phillip Marlowe is hired by a dying millionaire to find out who’s blackmailing his youngest, and craziest, daughter. In the process, Marlowe gets tangled up in murder, gangsters, rare book sellers and Lauren Bacall. 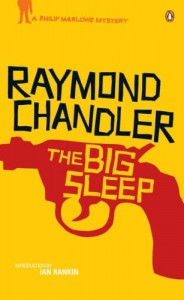 Is it a mystery?

Detective as protagonist?
Jenny:
Lani: Absolutely. It starts right where the trouble starts, when Phillip Marlowe is called in to help a sick old man get his youngest daughter out of trouble. Problem is, the youngest daughter likes trouble. A lot.

Murderer as antagonist?
Jenny:
Lani: Yep. It’s quite a tangled web the bad guy weaves, and sometimes it’s hard to follow all the threads, but they do all lead—eventually—to the same bad guy.

Conflict created by mystery/murder?
Jenny:
Lani: Yes, the conflict is based on Marlowe wanting to get to the bottom of it all, and the murderer wanting him to keep his nose out of it.

Is it a good mystery?

Fair play with all the clues given?
Jenny:
Lani: Yes, although many of the clues were pretty hard to follow at times.

All threads pertaining to the mystery pull together at the end?
Jenny:
Lani: This is where The Big Sleep falls apart. At the end, it’s still ambiguous as to who the murderer is, which I think is a big drawback for a mystery. And no one knows what the hell happened to the poor chauffeur.

Our Ratings and Breakdown:

3 responses to “The Big Sleep”