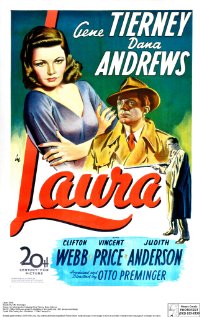 Story:
A detective falls in love with the woman whose murder he’s investigating. 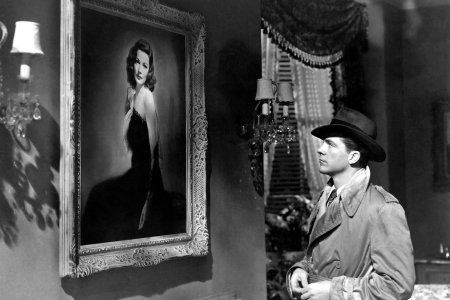 Mystery Analysis:
Detective as protagonist?
Jenny: Yes.  Introduced in the first scene, then dropped while a suspect he’s interviewing throws the movie into one hellacious long flashback, then back to him.  Waldo’s voiceover is confusing, too.  The beginning of this movie is really botched, but MacPherson is definitely the protag.
Lani: Yes… once we finally get to him. The first third of the movie, Waldo’s presented as the protagonist, and the switch isn’t made gracefully.

Murderer as antagonist?
Jenny: Yes.  He does everything he can to muddy the investigation and throw suspicion on the other suspects.
Lani: Sure. Mostly.

Conflict created by mystery/murder?
Jenny: Yes.
Lani: Yes, the death of Laura brings the protagonist and antagonist together.

Fair play with all the clues given?
Jenny:  Yes.
Lani: Yes, in that we get all the clues that the detective does. He doesn’t get many actual clues, though.

Solved using deduction, not luck?
Jenny: Yes.
Lani: Yes, although if he’d looked inside the clock right after Waldo first mentioned it… but no nitpicking. Yes.

All threads pertaining to the mystery pull together at the end?
Jenny: Yes.
Lani: Yes. Not a lot of threads there, but yes.