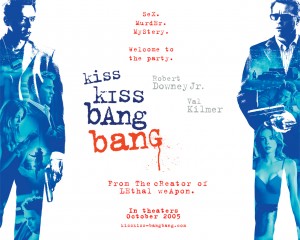 Story:
A murder mystery brings together a private eye, a struggling actress, and a thief masquerading as an actor. 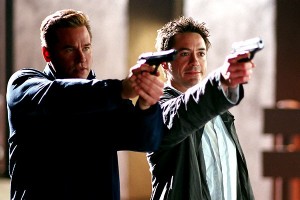 Source:
“Bodies Are Where You Find Them”, by Brett Halliday 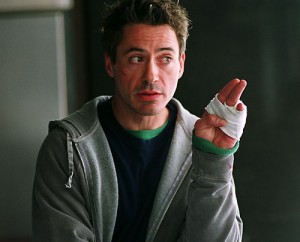 Mystery Analysis:
Detective as protagonist?
Jenny: Yep.  He’s even first in that stupid prologue.  Unfortunately the mystery doesn’t start there.
Lani: Yep, although it takes a while for the problem to start.

Murderer as antagonist?
Jenny: Yes.  As soon as the murder happens and Harry screws up the murderers nice clean getaway.
Lani: Yes, once the murder has actually happened.

Conflict created by mystery/murder?
Jenny: Yes, but again, not until the murder happens.  This movie needed to start much later; it’s got two prologues and then a huge waste of time about the heroine’s friend, and THEN the murder happens.
Lani: Yes. Until Harry witnesses the dead girl in the trunk, the antagonist couldn’t care less about him.

Fair play with all the clues given?
Jenny: Yes.
Lani: Yes.

All threads pertaining to the mystery pull together at the end?
Jenny: Too damn many threads are resolved, some of them having nothing to do with the main plot.  We were hostile at that point.
Lani: Yes, although some threads are resolved when we don’t need them necessarily.

Jenny says: 4 Pops
Mystery: 5, Craft: 4 (splitting the difference between the sloppy plotting and the incredible dialogue) Suspense: 4, Romance: 3 (Harry and Perry would have gotten a 5; they really missed an opportunity to do a great gay romance here)