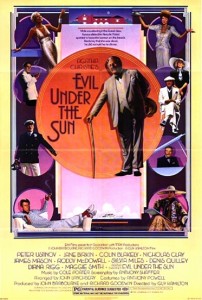 Story: A group of people gather at a seaside resort where jealousy and hatred swirl around a famous actress, observed by the equally famous detective Hercule Poirot. 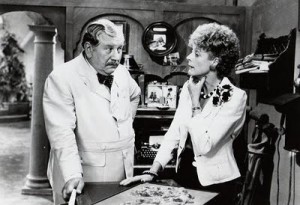 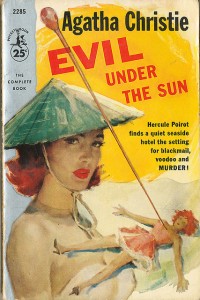 Jenny: Yes.  Ustinov’s Poirot is bigger than life, doggedly inquisitive, and in the movie version, on a paid investigation.

Lani: Absolutely. Although there is a minor blip in the beginning with a murder that seems unconnected, Poirot takes over as protagonist and is in conflict with the antagonist to solve his mystery from the (almost) start.

Jenny: Yes, something that’s made clear in the big showdown at the end, complete with Poirot stopping the Big Bads as they head for the door.

Lani: Yes, even before s/he commits the murder, which makes for a solid antagonist and conflict all the way through.

Jenny: They’re all at each other’s throats before the murder which happens half way into the film, so the conflict looks like it’s being stirred up by the victim, but if you look closely, it’s being stage-managed by the murderers.  Still, as we said in the podcast, the murder is actually part of the find-the-macguffin/cover-up-the-theft-of-the-macguffin conflict between Poirot (hired to find the diamond) and the thieves who have come to the island to murder the only person who can pin the theft on them.

Lani: The problem here is the question, not the answer. During the discussion, we had some clarity on whether it’s the murder that creates the conflict, or the desire of the protagonist/detective to find answers, and the antagonist/criminal to hide them. I think this question needs to be about the conflict centered on the resolution of the mystery – protagonist yay, antagonist nay – and to that question, I answer a hearty, “Yes.”

Jenny: Yes and no.  The audience gets the clues when Poirot gets them, and he even lists them near the end of the movie, but they’re for only one partner in the murder, and they don’t lead to the key to the mystery, the motive.  It gets murkier on the second partner in the plot because the clues are weak and while prominently displayed on the screen, obscure.

Lani: I had some minor quibbles about playing fair; there are a couple of reveals at the end that are kind of there as clues, but not entirely. So I would say predominantly yes, with a couple minor exceptions.

Jenny: There’s some bad luck on the part of the murderers–tossing the bottle into the sea and having it almost hit a witness, for example–but Poirot solves it by deduction.

Lani: Absolutely. It’s Poirot’s ability to distill the clues into a narrative that tells the tale which solves this mystery.

Question from podcast:
We were trying to remember who narrated the first scene on the moors.  The answer is nobody, it’s a series of quick cuts: woman running across skyline, runs into police office and says, “There’s a body on the moors,” police open the car door and tell her she needn’t look again, shot of body with marks on neck, shot of doctor estimating time of death (doesn’t mention cause of death.”  Entire sequence is two minutes.
Then there’s the scene in the insurance office which is another three minutes (and where we thought the story actually started).
Then five minutes in, the story switches to the hotel.