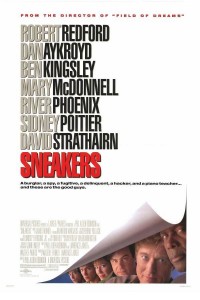 A little later than originally planned, Jenny and Alastair discuss this thoughtful, well-written and prescient caper — but do the flaws in the craft spoil an otherwise excellent film?
Get the podcast: [Listen here at PopD] | [Go to iTunes]

Alastair says: 5 Pops ~ This certainly isn’t a perfect movie, but it does so much right that I’m willing to overlook the cracks in the foundation. Great character writing, smart dialogue, and an interesting central question invigorate what is otherwise a fairly straightforward — and oddly dispassionate — caper.
Alastair’s rating breakdown: Craft: 4, Comedy: 5, Suspense: 4

Jenny says: 3 Pops ~ Start where the story starts with your protagonist in trouble, and then make sure the story is ABOUT your protagonist . . . even if you do everything else beautifully, if you screw up those two things, you’re toast. Or a 3.
Jenny’s rating breakdown: Craft: 3, Comedy: 5, Suspense: 3

Story: After being conned into a stealing a black box, a group of security experts plan a heist to even the score. Release Date: September 9, 1992 Writer: Phil Alden Robinson, Lawrence Lasker, & Walter F. Parkes