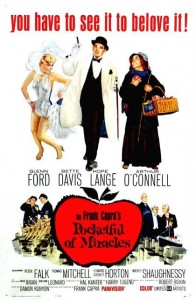 Alastair fills in for Lucy and there is general agreement that there’s a good movie in here someplace, and that Peter Falk is a national treasure (the Academy agreed: he got an Oscar nom for his performance here as JoyBoy). Get the podcast: [Listen here at PopD] | [Go to iTunes]

Alastair says: 3 Pops ~ Gaping flaws in the craft of this movie aren’t enough to detract from the pleasure of watching the brilliant supporting cast.

Jenny says: 3  Pops ~ See it for Peter Falk and the rest of the great supporting cast, but a caper story with a weak hero isn’t much of a caper.

Story: A mobster trying to hold onto power and his girl friend gets distracted when the beggar who sells him lucky apples needs help to con her daughter and some visiting foreigners into believing she’s a wealthy woman. Release Date: December 25, 1961. Writers: Hal Kanter and Harry Tugend from a story by Damon Runyon.