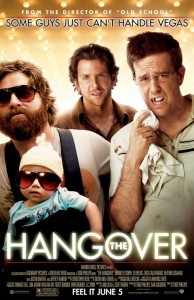 Lucy and Jenny have to drink just to get through talking about this turkey.

Lucy says: 1 Pop ~ A schizophrenic movie with no structure, no consistency in character and too few charming, funny moments. There was a hint of a great story in there, but it never got off the ground.

Jenny says: 2 Pops ~ Part of this were funny, parts of this were awful, it started in the wrong place and ended on a dumb note. It’s a Frankenstein plot, a bunch of miscellaneous parts from different writers stitched together in with the mantra “as long as it’s funny, nobody will notice there’s no protagonist or antagonist or pacing, just a lot of . . . parts.” Bleah.