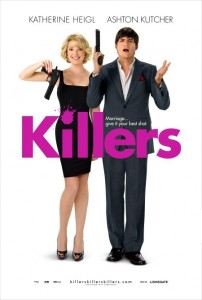 A movie that would have benefited greatly from the writers knowing what story they were telling. Still, Catherine O’Hara makes it worth watching.

Lucy says: 2 Pops ~ Again, I have to say – “I’m hot, you’re hot” does not a romance make. Ashton Kutcher is much better in this than he typically gets credit for, but the dialogue was so leaden and the heroine written with such antipathy that even the good stuff – and there is some good stuff here, love the suburban neighborhood turning into a mass of killers – gets weighted down with the crap.

Jenny says: 2 Pops ~ Ashton Kutcher deserves better than this and so does Catherine O’Hara. I’m coming around to Lucy’s argument that the first half hour is prologue and the story really starts half an hour in, and it’s the hitman’s story again as assassins come out of the woodwork to take a $20 mill bounty on him. Unfortunately he’s married to a mostly-bubble-head and even once the shooting starts, his goal is muddled beyond trying to stay alive. Very like Mr. & Mrs. Smith, it’s a good premise bobbled.

Story: A vacationing woman meets her ideal man, leading to a swift marriage. Back at home, however, their idyllic life is upset when they discover their neighbors could be assassins who have been contracted to kill the couple. Release Date: June 4, 2010. Writers: Bob DeRosa and Ted Griffin