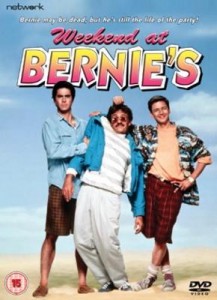 Lucy and Jenny discover that audacious comedy requires strong craft to hold it up. The people who put together this movie must have missed that memo. As a side note, this 44th episode of the podcast runs exactly 44 minutes and 44 seconds, completely without manipulation from us. We’re taking that as a sign that the Universe loves PopD. Good to know.

Lucy says: 2 Pops ~ I laughed out loud a lot in this movie, considering what an unholy mess the story was. A great lesson in what not to do with your protagonist. Don’t make him a lying ass and a wet blanket. Don’t make the best friend more interesting and fun and heroic. Do give him a goal, and a personality. Maybe they’ll bring back just Larry for another sequel. That movie, I’d watch.

Jenny says: 2 Pops ~ Some really funny physical comedy and even funnier character interpretation by Andrew McCarthy cannot disguise the fact that the structure in this story is about as consciously present here as Bernie is for most of it. You need a protagonist with a goal and an antagonist even if you are writing about dragging a dead guy around the Hamptons.

Story: Two guys have to keep up the pretense that their mob-murdered boss is alive.  Release Date: July 5, 1989.  Writer: Robert Klane